In the presence of H.R.H. The Princess Anne, Mrs Mark Phillips, GCVO Royal Artillery Mess Woolwich Thursday 24th July 1986 The evening marked the retirement of General Sir John Mogg as president of the Army Benevolent Fund. This would be my last Royal dinner in the Woolwich Officers Mess. The scene was set for our special Royal visitor. There were two 25 pounder Guns on display outside the Mess and Herald Trumpeters announcing the Arrival of Princess Anne.

The Officers Mess has been on this site since 1783 making it one of the oldest in the British Army with its magnificent chandeliers and priceless silverware on display. The Mess servants known as the “white waiters” were dressed in Georgian uniforms from the original colour of the Livery. The evening started with a Sunset Ceremony by the Band of The Royal Artillery marching on parade to the Royal Artillery Slow March. Then came some incidental music of Trumpet Tune and Air followed by the playing of Sunset. Finally the Band marched off to their own quick march “British Grenadiers”.


My evening was going to be spent playing dinner music with the Royal Artillery Orchestra, under its Director Major Frank Renton. The music program was as follows: “Marching Strings” Ross Overture “Die Schone Galathea” Suppe Symphony No 92 in G Major Haydn (The Oxford) Adagio, Allegro Spiritoso Adagio Allegretto Presto Selection “Guys and Dolls” Loesser Selection “Dam Yankees” Adler “A Birthday Bouquet” Arr. Renton March “Florentiner” Fucik Regimental Marches Post Horn Gallop I had played in the R.A. Mess on numerous occasions during my 22 years service and at the end of the dinner the trumpet player had to perform the Coach Horn Solo followed by the Post Horn Gallop, luckily for me my solo went well and was well received. 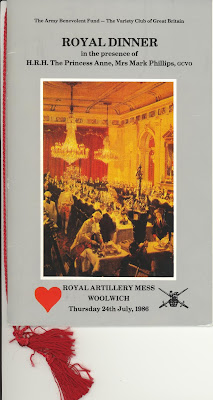